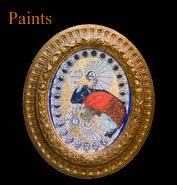 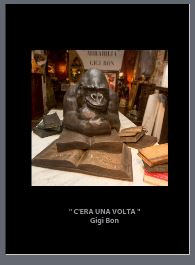 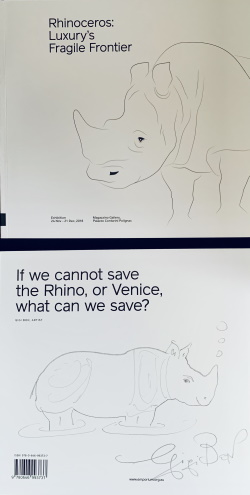 The name for this workshop comes from the idea of the “wunderkammer” or “Rooms of amazement” collections which in the fifteenth and sixteenth century with scientific is knowledge. They created the occasions for a “privileged meeting” with the fantastic, the impossible and the wonderful: a theatre of natural and human strategies. Gigi Bon’s artistic activity consists in collecting and creating rare objects and figures which assume different meanings depending on the order with which they have been collected and rearranged with” the logic of amazement “in mind . Collecting this series of objects in a place magically detached from reality seems almost utopian. The apparent realism of the images is enriched by the stylistic alchemy of invention, by the crossbreeding of bizarre shapes and meaning.

This workshop aims to offer , as an alternative to the galleries , the opportunity to learn about just how an artist works. The idea is that of a” Renaissance workshop”, on the ground floor, where the various stages take place , that of conception, planning and execution of the woks, which one then finds on exhibition and for sale. For example, the production of figures modelled in clay and in chalk, or one can learn about the stage when works in wax are re-shaped before casting. Precious and less-precious materials are used, as are techniques borrowed from other fields, as for example, the so-called “cire-perdue” process used with glass. Sometimes works are executed using a combination of the most diverse materials as bronze and glass, coral, shells or ostrich eggs, always, tough, with the tradition in mind. The bronze sculptures by Gigi Bon are, for the most part , fantastic animals which belong to a “surreal Bestiary” where Venetian architecture and legend are fused with natural shapes, or “metamorphosis” where realistic figures transfigure Venetian history into “myth”. The works, “cire-perdue in bronze” ,are all unique pieces inspired, as always , by Venice. There is a series of newly-designed paste jewellery in glass, gold , silver and bronze and artificial gems , all numbered and signed. Three are the recurrent themes of Gigi Bon paintings. The “ Imaginary portraits” a personal and fanciful interpretation of her subjects dreams and visions. Close to this opens the world of the phantasmagorical objects of the “wunderkammer”, mixed as to re-invent the tradition. Finally Gigi Bon’s view of Venice. An imaginary site far removed from the oleographic ones. La ”Serenissima” fully understood as magical alchemy, light and shadow, constantly nourished by cultural, ethnic and aesthetic elements. The creative spirit the Venice evoked becomes a “ state of grace” similar to limbo, hallucination... dream... almost a city free of time. Gigi Bon’s paintings are enchanted versions for anyone open to enjoy the multiplicity of reality. The works of Gigi Bon are in the collections of the “ fantastic” and “imaginary” all over Europe, the Americas .